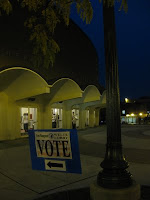 Last Tuesday morning, I hustled to campus in hopes of not only hearing, but seeing fellow students and professors express their attitudes and moods walking to classes, sitting in classrooms, even while talking on their cellphones. I wanted to see facial expressions, bold debates with other individuals smack dab in the middle of campus grounds; to see signs, banners, and t-shirts. My first election serving as a journalist to the public, I anticipated an uprising. I hoped to run around, scribbling notes as fast as I could; trying to grab each suspense filled moment.
Writing about the election wasn't the only first for me in the course of the day; it would be my first time voting at the age of 23. Why did I decline to vote in 2004 when Bush battled Kerry for another four years in the office?
Being born and raised in Indiana and Ohio, the majority of my family and relatives are Republicans, respectively. When I was little, picking the next president was like rooting for a sports team because one or more family members were a fan: I always was swayed towards the Republican candidate because that was what they approved of.
Vaguely, but surely, I still have memories of the early elections in my lifetime. In 1992, I was in first grade, sitting in my house in West Carrollton, Ohio, listening to the television, the radio, and my father speak of George Bush Sr. and Bill Clinton. Although I was not cognitively advanced enough to understand any particulars of the electoral process, I wanted Bush Sr. because my family spoke well of him.
When 1996 rolled around and Clinton was up to renew himself for another term against Bob Dole, I found myself in my fifth grade classroom arguing with my classmates, even my best friend, over which President was better. I wasn't the only one influenced by my parents: we all were.
It wasn't until 1999 that I received the biggest culture shock of my life: moving from the Midwest to the liberal East Coast.
Living in Connecticut, I learned to keep my mouth shut in regards to politics. As high school rolled around, I'd have political discussions and arguments with my father, either conceding or agreeing with what was agreeable, but not with my peers for fear of being attacked. I absorbed my new liberal surroundings while questioning them and always being skeptical. I didn't feel ready to vote in 2004 because I was unsure of which party I stood for.
As of the past couple years, I've combined the best of both ideals in each political party to make my own pseudo-party. Choosing a candidate in this election was a difficult task, but in the end, I chose Barack Obama because I believe he is someone as understanding as I am when it comes to leaping over the party barriers and listening to what every individual has to say.
While I didn't get the campus response I had initially wanted, I knew the majority of students felt the same way. Election day at Central was tasteful, rather than barbaric: people had an extra spring in their step, an “I Voted Today” sticker worn over their heart or on their face; it was a quiet, silent hope.
Going into a classroom, I queried a melange of students on whether they were voting or not, to which the majority responded positively. Most were anticipating the “historic” night, as most coined it, and gave general responses towards the election, saying that it didn't matter which candidate people voted for; it would still be monumental in terms of having an African American president or a woman vice president.
The class, Contemporary American Literature, studies writers who are deeply invested in the “American Dream” and how most American citizens are disconnected from their hopes of ever establishing one. English professor Aimee Pozorski is not the type of teacher who discusses her own views in her classroom because she understands the need for students to have the ability to make their own decisions. Outside and away from the ears of other students, she spoke of her approval of Obama.
“Obama not only looks to the future with hope, but he looks to the past with a sense of the history that the United States was founded upon: the equal voice that democracy promises, freedom, education, safety from harm, the physical necessities for day-to-day living as provided for the poor by the people with the wealth,” Pozorski said.
“I find it deeply troubling that we are one of the few democracies where the people are afraid of the government. Based on our founding documents, it should be the other way around really- the people should have the power. I believe Barack Obama will restore that power to the people.”
After taking photos of voters walking in and outside of Welte Hall, it was time to leave campus and go vote for my first time at my registered location. With no line whatsoever, the elderly ladies ushered me in with the kindest of attitudes and there I was: nestled in a plastic booth with a marker in one hand and a ballot in the other. Hours of anticipation compared to the two minute process seemed ridiculous, but I grinned as they scanned my ballot and off I went to watch the results across the country pile in.
Fast forwarding to eleven o'clock at night, sitting with two of my closest friends and calling another one screaming on the speaker phone, the wait was over. We did it.

Posted by Karyn Danforth at 9:34 PM No comments: